The year was 2000. Attila Miszti, a recent graduate of MTI College’s IT program, had just received his first weekly paycheck. 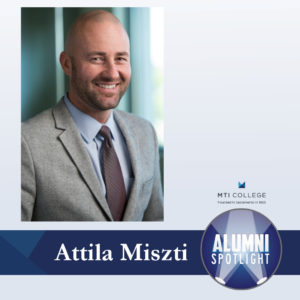 At the time, he felt like it was all the money in the world.

But as he thinks back on it now, Mr. Miszti believes that paycheck represented something much bigger than anything that could ever fit into a wallet. To him, it represented just how much MTI College believes in its students and strives to empower them to succeed in learning, and life.

“That job was waiting for me once I graduated. One of my MTI instructors worked for Gap Corporate, and he helped line up a full-time contract position for me while I was still completing the program. That really showed me how the people at MTI go beyond the mission of educating and training their students, and help connect them with real professional opportunities and great employers.”

To fully understand the outcome of Mr. Miszti’s experience at MTI, you need to go back to what led him there in the first place.

After graduating from Del Campo High School in 1998, Mr. Miszti knew that college was his next move. The next fall, he enrolled at a local community college as a way to fulfill the general education requirements he knew he’d eventually need, while earning an associate’s degree at the same time.

But not long after enrolling, it became clear that a change would have to be made.

“After I enrolled I was only able to get into two of the five classes that I was going to need to fulfill my gen-ed requirements,” Mr. Miszti recalled. “It was incredibly frustrating. At that point I knew I didn’t want to take six years to earn a degree that should only take four just because of congestion in the system.”

It was the late 1990s, and the dot-com boom was in full swing. Mr. Miszti had always been interested in computers and technology. While exploring various options for changing schools, when he looked deeply into the programmatic offerings and reputation of those options one clearly stood out—MTI College.

It didn’t take long for Mr. Miszti to realize he’d made the right choice. A student in the IT program, he was learning the most current and relevant topics happening at the time. He was able to get exactly the courses it would take to complete the program in two years. And his instructors were experienced professionals who were personally invested in his success.

But that really only tells half the story.

As Mr. Miszti was working his way through the program, he volunteered to help with some of the IT work that was needed at the new building that MTI College was opening. The dedication and quality of work he demonstrated there led to an offer of a part-time job at the College while he was completing the program.

And it was through that part-time job he worked while he completed his academic program that one of his instructors, who also worked for Gap Corporate, offered him a full-time contract position once he graduated.

“It showed just how important that decision to attend MTI College was. I was able to build a network and leverage the knowledge I was gaining into some meaningful opportunities that laid the foundation for my future career. All because of how personally invested the instructors there are in their students.”

With his IT career in full swing, Mr. Miszti knew he was in a position most others that were his age, and working in his field, weren’t.

“I was in my late 20s, and I already had 10 years of corporate experience under my belt. Not many others did.”

While he enjoyed working in IT, Mr. Miszti still wanted to take his career to even greater heights. Although working in IT brought its fair share of challenges, those working in the field typically weren’t in a position to make decisions that would directly impact the overall health and future of the organization.

This is where Mr. Miszti envisioned himself, and he knew that more education was the path to get there. So he decided to return to school to pursue his undergraduate degree in economics at the University of San Francisco. Once again, MTI College came through for him. He was able to transfer all of the credits he’d earned at MTI to the program at USF and, as a result, earn his degree in just two years.

“MTI puts a lot of emphasis on its accreditation and positioning students to advance their education by transferring MTI credits. That clearly was a big benefit for me when I decided to go back and earn my bachelor’s degree.”

Eventually, Mr. Miszti took a position at Citigroup, and not long after decided to return to school to earn his master’s in business administration (MBA), this time at Sacramento State. It was his unique blend of IT knowledge and experience with a high-level education and training in business that, he says, set him apart in the eyes of employers.

After Citigroup, he took a position with the Sacramento Municipal Utility District (SMUD), where he quickly ascended from grid planning, to supply chain, to the position of Director of Line Assets, where he oversees line maintenance throughout the service territory.

“MTI accelerated a lot of things for me and opened some unconventional doors. Being able to get such great experience in a corporate setting at a young age made all the difference in the world.”

In his position with SMUD, Mr. Miszti spends much of his time evaluating resumes and filling open positions in his department. He uses his experience, made possible by MTI, as a guide.

“I value a combination of education and experience. I seldom hire folks who just have the educational component. I find that they’re not as well equipped to jump into a corporate and operational environment.”

And for anyone considering MTI College for their education, Mr. Miszti has advice on what they should know, and what to expect.

“One of the big advantages to MTI is that they take care of everything with regards to scheduling and courses. They ensure that you’ll get the exact courses you need within the timeframe to complete your program on time.

“And they’re always reexamining their programs and offerings to make sure they reflect the needs of local business and industry. This isn’t something that’s talked about very much, but it’s very important and a big part of MTI’s success at putting students in a position to succeed in their field of study upon graduation.

“MTI has been in business 50 years. That doesn’t happen by accident.”