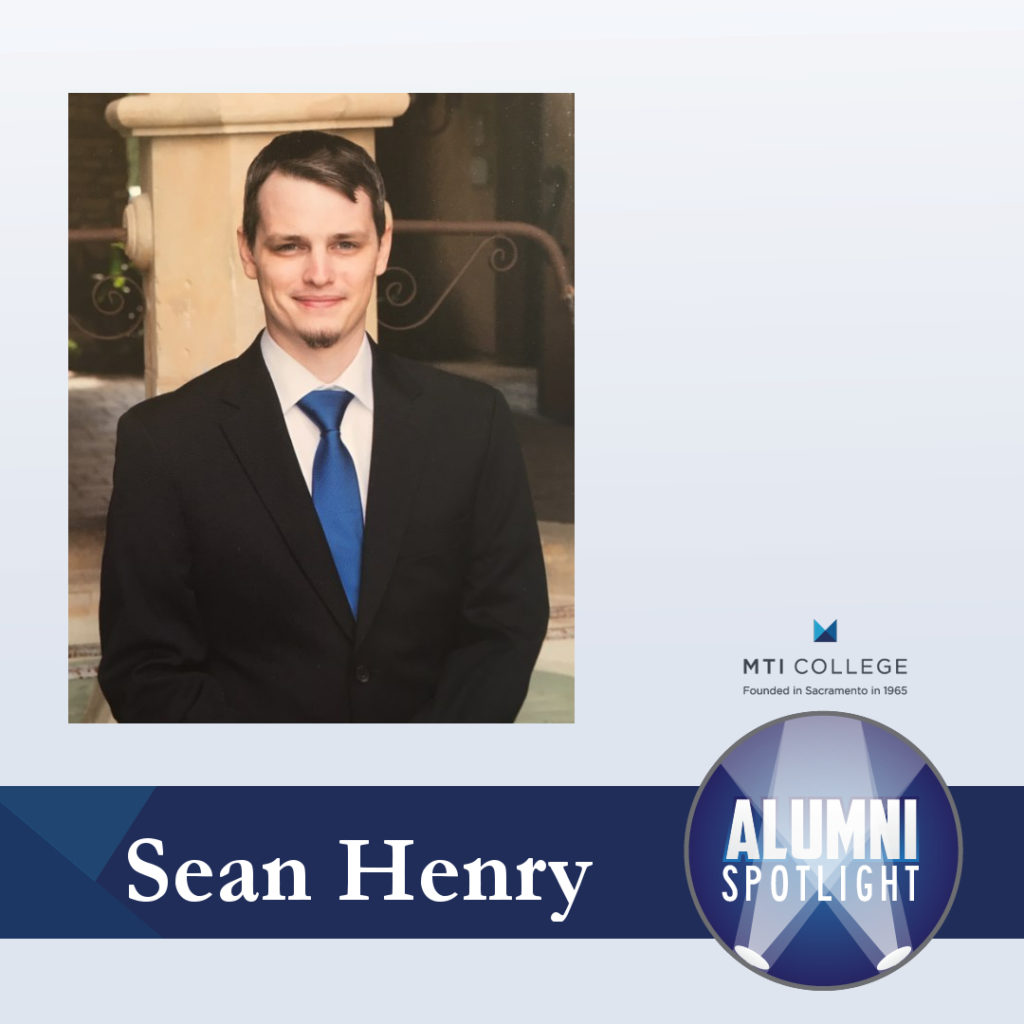 Sean graduated from MTI College’s IT Network Administration program in November 2015. He chose this degree because he believes it to be a skill that is in high demand and realized it is something he is very passionate about. It took him some time to come to this understanding, but the payoff has been well worth it. Immediately after high school, Sean enrolled at his local community college, bouncing from major to major, unsure of what he wanted to pursue. “I really couldn’t find something that would hold my interest and be able to pay the bills,” he recalled. He began looking into IT at the community college but became frustrated with the timeline. If that was something he was going to pursue, it would have taken him about three or four years, because classes were only offered at certain times and dates. Unfortunately, it was something that was just not able to work out with his schedule. “So, I looked around and tried to find a place to get IT training done,” Sean explained. “I found MTI and I loved them because the whole campus works in conjunction with one another. You never had a problem getting the classes you needed to graduate on time.”

According to Sean, the other main factor that determined his decision to enroll at MTI College was the Career Services department. After his first year at MTI, he would have access to temp agencies and job listings that would be mailed out to him to help find jobs within his field. “The job placement rate, within six months after graduation, was 95% when I was there. It couldn’t be beat. I wanted to go to school, and after I was done, I wanted a job. And a 95% chance I’d get a job after the program? That is icing on the cake.”

Sean’s experience at MTI was both humbling and impactful. “My first year there, I walked in thinking I knew so much about computers and the first several classes were introductory and would be very easy.” Although Sean was innately skilled at IT work, his courses were not as easy as he expected. He had one professor in particular who really made an impression. “He is an amazing human being and changed the way I looked at the IT field. Previously I looked at it as something I was good at. Something I could do to support myself and make decent money doing it. But, he helped mold it into a passion for me.” With both respect and a laugh, Sean added, “He really cultivated me and my fellow students into IT professionals as opposed to computer nerds.”

Prior to MTI, the extent of Sean’s experience was fixing computers for his family members and friends. But now, he just finished signing a contract to work as a PC technician for the Roseville Joint Union High School District. He was drawn to this position because his family is in education, as well. His mother works in upper-level management for a university in California and his father is a professor. This position combines his passion for IT and working in an educational environment. “I love being around people who want to learn,” he explained. His responsibilities will range anywhere from basic troubleshooting, to hardware and software updates, to fixing malfunctioning machines and removing viruses. Previous to this position, Sean worked at a software company as a helpdesk analyst, his official title being Customer Experience Specialist. He would work over the phone with employees, utilizing remote control assistance, for a CRM program that the company had built in-house. Sean would also troubleshoot email problems as well as help people get set up with new email addresses and domains.

Sean’s confidence in his ability to perform well in the IT field is inspiring. He attributed this to how well prepared he was through his education at MTI. “I learned enough there that I have not had any problems at all,” he explained. Not once thus far has he felt he did not know what he needed to in order to succeed. “So far with the credentials I earned there, if I get an interview, I get the job. I’ve only interviewed twice since I left MTI and I got the job both times. Partly because of the credentials I earned that they offered and partially because of the shop courses they had.” Sean also had two courses that were focused on preparing students for their career search. These classes taught him how to interview and how to write a resume. “They taught me everything I needed to know about walking into an interview and making the best possible impression.”

Looking back on his journey, Sean undoubtedly made the right choice. “One of the things that a lot of people don’t realize about the IT field is how fulfilling it could be. Because everyone thinks it’s just sitting behind a computer and typing, but really, in all of the jobs that I have had so far, I very much enjoy the fact that I am making other people’s days better.” Before MTI, Sean was a bit of a wanderer. He did not know what he wanted to do with his life and went through multiple majors to figure it out. He started off in culinary science, then went to biology. From there, he tried chemistry and then nutrition. But now, Sean is fixing problems for people and he could not be happier. “A lot of people discount just how people-oriented the IT field really is. And that’s my favorite part of it. I arrive with a smile on my face and leave with a smile on theirs.”

Moving forward, Sean wants to continue building his work experience to move into a higher-level position. He would enjoy being either a network engineer or a server administrator. He has all of the certifications he needs for a server administrator position because of additional courses he was able to take at MTI. He will have to take additional courses in order to be certified as a network engineer, which he plans on doing soon. In this moment, however, he is embracing how far he has come. “I’m employed. I’m a proud member of society. A few months ago, I was able to move out and am paying the bills on my own. MTI really was the launching platform for my adult, professional life.” He even referred his “better half” to MTI, as well. “I basically dragged her behind me,” he laughed. She went through one of MTI’s healthcare programs and had no problem getting a job in the medical field once she graduated.

Honestly, Sean would recommend MTI College to everyone. “MTI really sparked a fire in me that nowhere else really had. And every day now I go to a job that I love doing. I wake up in the morning happy to go to work. I don’t think that had I picked one of those other fields that I could have said that.”